On this page: reviews of vegan cheese, and where you can get it.

Because taste is so subjective, you may like to take a look at the “What May Affect My Reviews” page before reading the reviews.

This is hard vegan cheese that you can grate. It has a fairly strong flavour which is quite cheesy, but also quite salty and oniony. It is one of the nicer vegan cheeses I have tasted and is good to put in or on food for a cheesy flavour.

This Violife Vegan cheese has a rubbery texture and is creamy, salty and rich tasting to me. I find it TOO creamy, and I get sick of the creaminess of it quickly.

I tried this on pizza, and I also tried the Violife original (above) on pizza. They taste very similar, but I prefer the vegamigo as it is not so overly creamy. It only has a subtle taste though.

I didn’t like the smell of this vegan cheese at all. When I tasted it, it was a bit better than the smell, but still not nice. Steve was not keen either. The dog seemed to like it though.

I preferred this to the cheddar one, but I still didn’t like it much. Steve thought it was just OK but not that nice. It was one of the nicer of the supermarket own brand vegan cheeses I have tried, but that’s not saying much.

This vegan cheese rivals Violife Smoked cheese. When I first put it in my mouth I wasn’t particularly impressed, but once I’d chewed it a few times, a lovely flavour came out. It has a lovely after taste too. It is not too smoky, but it has enough flavour. Steve and I both like it, and find it quite more-ish.

Both Steve and I hoped this would not taste like margarine, but unfortunately we both thought it did. It might be nice to put in sauces.

Neither Steve nor I were very keen on this vegan cheese. We tried it both as it comes, and melted on a pizza. Steve thought it had a funny after-taste. I didn’t, but I just didn’t really like it.

I really liked these, they have a gently smoked taste. The texture is quite rubbery, like the Violife original slices. This smoked cheese is one of my favourite vegan cheeses, and I have it regularly.

This had a mild smoked flavour which I probably would have liked better stronger. My friend agreed. The texture was quite crumbly but it was convincing as cheese. The taste wasn’t great, but it was one of the nicer supermarket own brand vegan cheeses.

These slices of vegan cheese tasted just OK. The texture was slightly rubbery. Neither Steve nor I wanted to buy them again.

This was a quite similar taste to Violife Smoked cheese slices. I think I like the violife cheese better, whereas Steve preferred this one. It is one of the nicer vegan cheeses.

This vegan cheese had a weird taste to me, almost like it had been tainted by the smell of nail varnish remover. Steve wasn’t keen either.

This also tasted weird to me, it had a bit of a soapy taste. I didn’t like it at all, and neither did Steve. However, it was recommended to me by another vegan, so obviously some people love it!

Both Steve and I liked these vegan cheese slices, but the more I had, the more I went off the taste. I think I found it too heavy on the herbs in the end.

Both Steve and I found this vegan cheese to have a pretty cheesy taste. It has a lovely cheesy after-taste, but I got a slightly odd taste from it too. It has a putty like texture, which I was not keen on in my mouth. I think it would be nicer if it was harder. We tried it grated on pizza too. It was difficult to grate because of the putty-like texture, and it didn’t melt very well. It instead went a bit crispy.

This is not as cheesy, or as nice, as the Piquant, and has more of the slightly odd taste I mention above. It’s OK though. The cheese is quite soft and squashy, a bit like Play-Doh.
We tried this vegan cheese grated on pizza. It was hard to grate because it is so soft. It didn’t really melt well, they went slightly crispy.

Neither Steve nor I liked this vegan cheese.

I’m not sure how this vegan cheese is different to Violife Original, as the flavour seems the same to me – a bit too creamy for me – but it certainly melts very well on pizza. Maybe how well it melts is the difference.

Steve and I both really like this vegan cheese and regularly buy it. The taste isn’t particularly mature or strong when compared to cows milk mature cheddar cheese, but it is definitely one of our favourite vegan cheeses. Five of my family members tried it recently and most of them liked it, despite a couple of them not liking other vegan cheese they’ve tried. My niece was particularly keen. This is a lot nicer than the Violife Cheddar.

This vegan cheese is much nicer once you’ve really chewed it up, as opposed to when you first put it in your mouth. It is a hard cheese and is pretty dry if you just eat it on its own out of the packet. We both liked the chewed up taste and after taste a lot. It has the cheesiest taste of all the vegan cheeses I have tried. It is one of our favourites that we buy regularly.

I wasn’t sure what to expect with this, as I do not remember having Greek cheese as a non-vegan. It is in a block, but it is soft as squashy, to the point of almost being spreadable. I squashed it on to crackerbread I had, ad it was lovely. It tastes like salty soft cheese spread.

I opened the bags and smelled these vegan cheeses and the smell was chemical-like. I don’t know if it was the cheese or the bag the smell came off, but I smelled the outside of the bag and it didn’t smell like that. All three of the bags of this cheese smelled like that inside. It was quite off putting. When I tried the cheeses, I think I preferred the Mozzarella, but it tasted a bit too much like margarine. The cheddar was worse than that, and the pizzeria blend was the worst of the three. Neither Steve nor I really liked any of them much. I don’t think Steve noticed the smell I did.

This vegan cheese is OK, but probably not nice enough for me to get again. it had a slightly fishy smell or taste to me, a bit like smoked salmon, but it wasn’t a really horrible taste though.

This vegan cheese has quite a subtle, but not unpleasant, flavour. I didn’t think too much of it to start with, but it grew on me, and by the time I’d finished the pack of slices, I wanted more.

I’d heard good things about this cheese. It tasted OK, but not as nice as I’d hoped. It was nicer than the supermarket cheeses I’ve tried, but Violife Mature Cheddar and Mediterranean style are still the nicest tasting. Steve quite liked this Daiya cheese.

I bought these Tyne Cheases at The Cumbria Vegan Festival, but they are also available from some health food shops.  The Sun Dried Tomato Tyne Chease is nice, but I think I prefer the garlic one – that is lovely, but pricey (7.95 each!). Both cheases have a hard crumbly outside, but are soft, and spreadable inside. They are slightly tangy, and although I would prefer less tang, but they are still both really nice. I wish they were not so expensive and more widely available. I would buy this often then, especially the garlic one.

This vegan cheese is grated ready to shake over your meals. It smells nice and has a cheesy flavour. It is nice, but it’s a shame the flavour is not stronger.

I liked the harder cheese in this flavour so wanted to try the creamed cheese. It was nice too, but I think I prefer the harder version, not sure why though, because I think this one will go further. Both are a little tangier than I would like, but they are still both really lovely. I would buy again, but they are expensive.

This vegan cheese spread is supposed to be a Philadelphia cheese spread type product. It lives up to its name in that it definitely has a creamy taste, but to me it has a taste of margarine, so I am not too keen. It doesn’t have a strong taste though.

I am not a fan of the Sheese hard vegan cheeses at all, so I was surprised that their cream cheese was a lot better. This is quite like I remember Philadelphia type spreads being like. It doesn’t taste too much like margarine, like some I’ve tasted, or too much like coconut, like others.

Steve thought this vegan cheese was lovely! Nice on crackers or in wraps. I thought it was OK, but got sick of it very quickly. It is quite a strong taste, and I found the herb taste to be especially strong. It does taste pretty much like the Violife tomato and basil hard cheese.

This vegan cheese spread is nicer than Violife Creamy original. It is nice as a dip or in a sauce, as long as you don’t use too much, as I found the herb taste pretty strong. 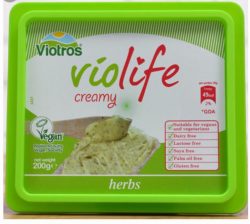 This is soya and coconut milk based vegan cheese spread. I do not really like the taste of coconut and could taste it a little bit in this product, but not enough to make me dislike it. On crackers it was rather nice and I may well buy it again.

This soft cheese is very nice. It has a taste of cucumber, and maybe slightly of celery too, but it is a nice combination. It is good as a dip, although as a soft cheese it is firm as a dip, or nice on cracker biscuits, etc.

Please let us know what you think of these, or any other vegan food products you have tried, and where you got them. The more opinions people have to go off, the better!
Please also tell us if you think we have made a mistake, or that a food product is now no longer vegan.